.
.
Six of one –lest we forget– and half-dozen of the other –let us remember– still totals twelve years.

Today marks the 12th anniversary of the attacks of September 11th.  On that beautiful sunny day in 2001, it seemed that nothing would ever be the same again. That we would never get over it.  The collected we of the stunned free world, the collective we of my heart-broken fellow Americans, but specifically the collective soul-shattering we of myself and my fellow New Yorkers, who survived through it then and live with it now.

If I could pack my things and move back home per se, perhaps I would be a little more nonchalant about it, as some are all this time later. But I am not a transplant, I have nowhere to go to and ‘get over it’ as I’ve heard/read over the past few years.  New York City is my home, where I was born and raised. The Twin Towers were as much a given in my social and physical landscape as The Statue of Liberty, The Empire State Building and hell, even Madison Square Garden.

The destruction of the Twin Towers changed not just our geographical landscape of the city, but of our very psyches.  What we went through as a City, as a people along with our kins-of-circumstance in Somerset County, Pennsylvania and the Pentagon in Washington, DC was something we will never forget.  Or will we?

We grossly underestimate the human capacity to forget. Not the overall event itself, that simply cannot be done. Not the individual stories of horror and of hope, as those who went through them deserve to honor or dismiss such as their souls can bear. I mean the necessity to resume our daily habits, the need to return to as close to our day-to-day existence pre September 11th as possible.  And other than our annual remembrance, or the accepted inconveniences now related to travel, this collective selective amnesia was actually encouraged in the first few crazy years after the attacks.

It is a cold reality, yet cruelly disconcerting fact to know that for most of us, in such a very short amount of time, the enormity that was September 11th has pretty much been reduced to conversational trivia. In the 70’s the curious question was ‘where were you when Kennedy was shot’? Now it’s ‘where were you on 9/11’? And I cannot remember the last time it was asked of me.

It has stopped being a part of the collective daily conversation, but it does crop up from time-to-time.  In my case, it also does not help that my working career for the past twenty plus years have been within viewing and often walking distance of the old and the new.

I remember this rush of pride, of honor, for the nation in general, but especially for my City the day I took this picture in January of 2012: 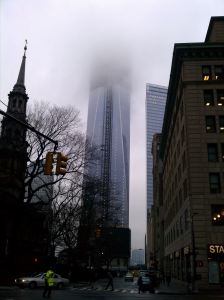 When I saw it that day, I was reminded so much of the original towers, when low clouds and fog would shroud the upper levels of the buildings in this same manner. Caught in the bittersweetness of the old and the new, I  had to take the picture. When I posted it to my Facebook I quoted Maya Angelou giving it the caption of “And still I rise…” Because yes, we did and still are rising as the rest of the construction that will comprise the new World Trade Center continues. 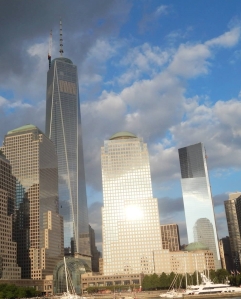 This past May, there was a cheer that arose across the City when it was announced the final spiral of the Freedom Tower was up, officially making it 1 World Trade Center. Now all 1776 feet of remembrance, national perseverance and home town pride is up for display. To quote Donnie McClurkin, “We fall down, but we get up…” Yes, yes we do.

To those who think we’ve “milked” this long enough and prefer that we forget it – I ask you to remember Pearl Harbor and think about it. We still honor the fallen at Pearl Harbor and that was how many years ago?  This is our new Pearl Harbor. The building of the World Trade Center and the National September 11 Memorial & Museum located in the footprints of the Twin Towers, is our new USS Arizona Memorial. Let those who want to forget about Tuesday, September 11, 2001, go ahead and do so.

The rest of us? We will remember.