We’ve reached past the halfway point of National Poetry Writing Month, Week 1 of 52 Essays 2017 and my email inbox has days’ worth of writing prompts from the several groups I am a part of. Yet, I have posted nothing since last Tuesday. From February 28th to April 10th I posted something everyday single day. There were also days where I posted multiple times, such as April 4th, where I posted thrice in a 24-hour span.  Yet for the past seven days, I’ve posted nothing. Maybe it is something of a burnout, I don’t know. What I do know is that it is not writer’s block.

There are 28 items sitting in draft mode. Some are partially done poems needing tweaking, some essay ideas to be fleshed out, three are nothing more than a couple of lines of an idea I want to work with at some point. Thus, I know it is not because I do not have anything to say. Maybe it’s because I have so much to say and it’s all bottle-necked. Still, with the exception of my Verbal Diarrhea Diaries, I have humbly learned that every emotion that emits or bon mot that bubbles from my lips is not necessarily something that I want put to print or pixel; this is especially true with essays.

It would be much too easy for me to become one of those writers who quickly spouts off on all the many events that happen- the tragedies, the scandals, the oh so many injustices in the world, with commentary from the hip. I admire the writers who can regularly, and seemingly within a mere few hours of an event, publish intelligently heartfelt, or uproariously satirical content. I even admire the tweeters can who evoke the right contextual chord in 140 characters or less within minutes of an event. I do consider myself a decent story-teller, and am humbled when someone messages me wanting to know if I am going to comment on some event or another. Yes, it pleases me that some want to hear/read what I have to say whether in poem, prose, essay or my Verbal Diarrhea Diaries, but I also feel something of a responsibility to that which will remain behind in these pixels long after I am gone.

The permanency of the Internet certainly makes me think more carefully about what I say, and when and how I want to say it, because I do not want my contributions to be little more than mindless chatter in the white noise of the Internet. It is that responsibility, in the week or so before April tenth, where I have increasingly found myself thinking of better ways to express a thought coherently only after I hit ‘publish’, which has me galled to no end.  That lexical lethargy had become increasingly worrisome and seemed to hit its head last week where the first time ever I trashed something I wrote. I did not return it to draft mode to be reworked – I trashed it. I can all but hear certain writer friends of mine gasp in the horror at this cardinal writing sin – I know, I KNOW, I sincerely apologize to you and to myself for that as well. So in the midst of what should have been another busy week of words, I chose to pause, to step back, to wait.

And in that pause instead of writing, I went back to reading. I have found one writer’s adage to be true – the best way to learn to write is to read. I like to read, or reread, the words of others who have inspired me to write. Read those writers whose voices, have helped me to discover my own. After all, we learn to read before we learn to write, so it makes sense in a way. I read some for pleasure and some for research of the ideas pieces in draft mentioned above. Twice I found myself donating a couple of hours to Wiki Walking. And I say donate as opposed to lost as most of the information accidentally gained was worth the time spent.

I want to feel comfortable in what I write, that I have something to say that makes sense. Sometimes I need to write because I feel confident that what I say that will inform or entertain others and sometimes I need to read so that I can be better informed and entertained myself. What I will always need regardless, are times like week -when no matter what is going on and as I pick up my pen again this week –  is to know which to choose and when. 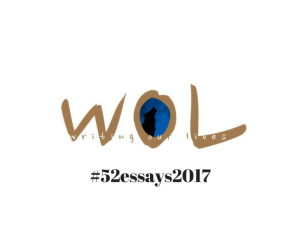 A year-long weekly personal essay/memoir/creative nonfiction writing challenge. To learn more about this challenge or to participate, check out Vanessa Martir’s website and learn about it.

3 thoughts on “Knowing When To Press “Pause””