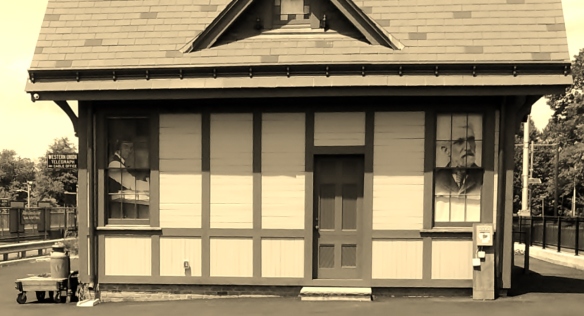 Clementine anxiously waited for the 5:40 out of the city, wondering if he would be on board. Why she could scarcely believe the amount of time that had passed since they last saw each other! She paced while twisting her handkerchief so tightly in anxious anticipation, it was not until the pain felt in her fingers from circulation’s lack stopped her.

Oh Clem, you’re being silly, stop it this instant!!

She chastised herself harshly as she unwrapped the material, flexing her fingers until blood flowed again. Finally, the train was here! She kept rising on her toes looking for a sign of him. As the amount of those disembarking thinned, she felt her first sense of dread. When she finally saw the face of her love as he disembarked, she knew.

He came with the porter, who was begging her forgiveness for his folly – he had only wanted to hold the pretty bird just for a moment, he didn’t expect it to take flight.  Clem only had eyes for the empty cage that once held, Rosie, her beloved parakeet.  The woe in her fiance’s eyes told her before his words could.

“She is lost and gone forever. Dreadful sorry, Clementine.”

Come now, you knew someone was going to go there, right?