The two major buzzwords this weekend> “Spring” and “Snow”. Since Thursday a lot of conversations wrapped around the hope of the First Day of Spring on Sunday and the despair that it was predicted to snow a few inches on Sunday here in New York City. I understand those who have only lived in New York City a few years to not get the weather patterns. Less than ten years? Okay, the weather my still surprise you. But if you have fifteen or mote adult years here, snow in late March is not something unusual, let alone new. For those with twenty-plus years as an adult here have no excuse.

It snowed on the first day of spring two years ago, I have the video. There was not the  amount of complaints on the day of the snow then as there were in the anticipation of it now. For some reason this year many folks were all in a titter and I don’t understand it.

All things considered we’ve had a decent winter this go around, this past winter. But yes, winter is winter and we’re all sick of the cold and were really spoiled by those 70 degree days we had a week ago. I recall times, not ‘the time’ – times, when it snowed in mid-April. Now that is unusual and worthy of grousing.  However, it’s MARCH, this is what happens in March. I’ve found the everything just shy of actual wailing and gnashing of teeth over this impending snow to be simultaneously amusing and enraging.  Enough that I posted the following on my Facebook: 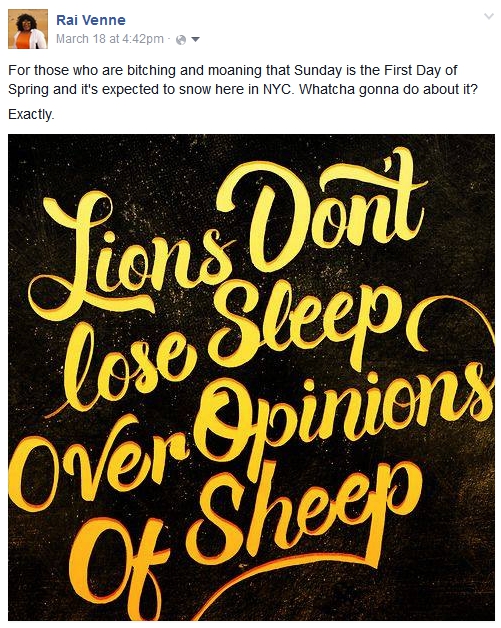 This morning was all blue skies and sunshine, as I walked in the door this evening the snow was just starting. It’s expected to snow throughout the night. I’m mentally preparing my world’s smallest violin motion for all the griping I know will occur tomorrow.  The Lion is certainly winning the bout this weekend, sorry Lamb.

Hopefully my fellow slicers have had more grinning and less griping this weekend:

Day 20 of the 9th Annual Slice of Life Story Challenge!