A week ago Saturday, I should have been repeatedly glancing at the time, waiting for 5:17 pm Pacific Daylight Time to make a call that would have rung in New York City at 8:17pm Eastern Daylight Time. For the past few days I should have been teasing my friend, on how I wish I could have personally seen the expression on her face when the man she had been living with for three years dropped down to one knee and proposed to her, in front of the family gathered for St. Patrick’s revelry while she and I were talking on the phone at 8:17pm EDT/5:17pm PDT. Why that exact time? Because the proposer was seventeen minutes late for meeting up with friends at a pub in San Francisco for St. Patrick’s Day, when he first laid eyes on her four years ago. As I was in California for the weekend, I thought it was a grand idea to call from the West Coast at that exact time tying the events together.

Instead, a week ago I was trying to get drunk so I could fake happiness for a party I had traveled to the other side of the country for, but no longer wanted to be at, because I received the news from the fiance-to-be the day before, that my friend was killed in an auto-accident by a drunk driver. The shock of the news put me in such a state, much to the worry of my drinking buddies who (when I did not show up at the dance Friday night an hour after I received the news), could not reach me through my self-imposed communication silence while I grieved.

Today we bury the body that died, then we will celebrate the life she lived. The past few days have been a whirlwind as I had chosen not to talk about it. Not talking about her is not an option today. For the past few days I noticed when either 5:17pm or 8:17pm struck and felt a pang. Today, tomorrow, a week from now and for several more weeks to come, those specific time markers will be a bittersweet memory; she would hate that.

Eventually, she will be a sweet memory and while she’d likely gag at the use of “sweet” as adjective in relation to her, I know she’d smile at that.

Yet I know as soon as later today, instead of tears of sorrow , it will be tears of laughter streaming down my face as we all tell our favorite stories about her, because you cannot talk about her and not laugh. She would love that.

Visit the rest of today’s Slices of Life over at Two Writing Teachers. 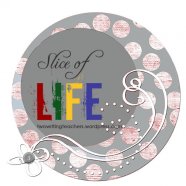