In what has become ritual, I spend the first couple days of the new year contemplating all the days of the previous one. It starts here with my being on this roof, making lists. It’s late and I enjoy the silence, but non-silence that is the norm for the City in the middle of night as most of the noisy fantasy that is New Year’s Eve revelry has faded into the quiet reality of New Year’s Day.  It’s cold, but I like it. It means I have the roof to myself.  Having done this for so long, everyone that matters knows where I am, and not to bother me. I come down when I’m ready or at 3am, whichever comes first.

I create these lists and then put them away in a drawer, not to be seen again until the next year. More like goal setting than resolutions, I try to accomplish what’s there to the best of my ability. Having done this for a dozen or so years, I like to review old lists first. See how my priorities have changed over time. Some years, every single thing I thought to do gets transferred in whole to the coming year. Some years, like this one, though not complete, I’m surprised and delighted by how much was done. However, one specific bullet point has transferred over for the past two years. It annoyed me to no end it somehow remained uncompleted for three years. I was determined it would not carry over into yet another year.

I glance at my watch, it’s 02:57. And as expected, I hear the old massive springs of the roof door screech when it opens at 03:00 exactly. The hall light spills onto roof momentarily, revealing a familiar shape, before plunging us back into semi-darkness as it closes. I immediately pull out a flashlight and turn it on, letting her be the moth to its flame as she makes her way to me.

Once she’s in front of me I let the flashlight shine on my notes, specifically on the last bullet point for this new year as rainbow points from the diamond ring resting in the crease of the notebook sparkle on the page while I silently plead to the heavens

I rise from one knee when my prayers are answered and swing the bright flashlight over the side of the roof in big circles.

I laugh hearing my brother’s cheering from street level as he lights fireworks at my signal. One of her favorite things, I cannot help but grin as she is completely entranced by the glittering skies for a few moments before remembering I am there. She sheepishly turns to me when the roof door squeals open again as family and friends also knowing the signal join this new celebration. 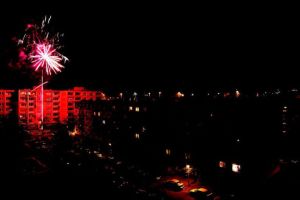