I know all of the windows are down and locked; that the shutters are closed against the harsh wind blowing. The torrential rain that drenched so thoroughly late in the afternoon has turned to chilling huffs of air drying by force, regardless of those who of us would prefer a traditional drying via the sun’s warmth.  I know cannot actually feel its chill while safely ensconced inside, but, its howl seeps into my emotional marrow and I pull the quilt tighter around me in physical protection from its presumed frost. I imagine the wind as malevolent bellwether to the coming winter. Its simple breeze of earlier gathering a nuanced force – going from breezes, to winds, to gales that make weapons of weak branches and blow through fallen leaves causing haphazard grooves to chart our paths to the fence and beyond once the snow starts to fall.

It is late, past the witching hour, everyone has long since retired to the warmth of their beds. I am restless, so I choose to read. The soft bluish flame of the kerosene lamp on the table lights the nuanced world of words before me warmly. I pick up the lime half on the table near me to suck. Landlocked as I am, I flatter myself as the protagonist of the novel I read; lying about on a sunny beach with cool lime libation in hand.

Only to inhale and taste petrol instead.

I have been up so long I’ve become near nose blind to the gasoline scent of the lamp, never a good sign. Its scent is what reminds me of its presence and that it, like me, is not inexhaustible. I smile at my own little Faustian folly as I mark my place, put the book away and turn down the lamp.

I glance around the darkened room as I rise for my own slumber. The worries of the previous day now clutter at the bottom of a handbag to be dealt with on the morrow. 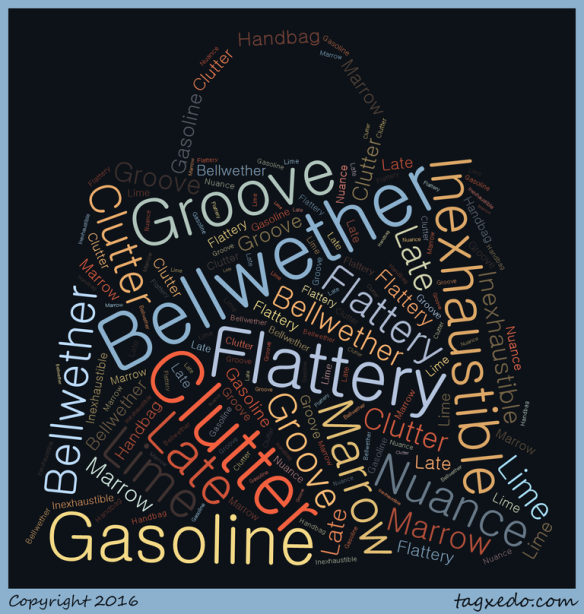 Use at least 10 of the words to create a story or poem. The words can appear in an alternate form. Use the words in any order that you like.