Posted by Raivenne on May 21, 2012
Posted in: Just Me, Being Me, Life in the Fat Lane, The Present, Thinking Aloud, Wishing On Stars. Tagged: A.J. Confessore, C.C. Banana, death, life, Memories, thoughts. 2 Comments

I did not think anything could bring me down from my “I’m Going To Paris!” high. The excitement for the trip has grown by leaps and bounds this past week and now it’s only two days away. Even the dreary rainy Monday morning that greeted me couldn’t get me down.

A.J. Confessore, for those who would not know, had a larger-than-life costumed alter-ego known as C.C. Banana. This included several subsets such as Bananakin Skywalker when interviewing in the Star Wars circuit and Ace Peeley when in the KISS realm.

A.J. also had another well-known costumed alias, Maul Stanley. Maul Stanley was a wicked merging of two of his favorites Star Wars (Darth Maul) and KISS (KISS member Paul Stanley). However, most knew him best as C.C. Banana. C.C. was infamous, in the fringes of the heavy metal crowd for his irreverent and often snarky, interview style.

A tiny sense of his wicked humor – at a party where the theme was “Gone but Not Forgotten” he appeared as thus: 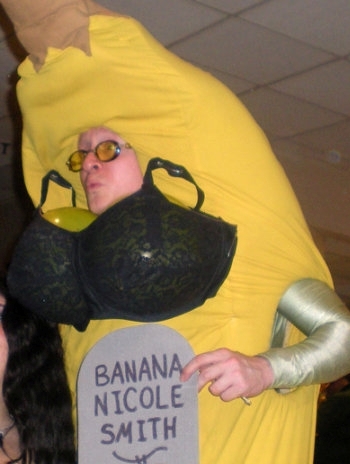 There’s a party happening this Memorial weekend. It’s the type of function where he would have made such an appearance as C.C.  I know there will be a moment of silence for him, which is odd for the energetic A.J. was anything but. Granted, he wasn’t everyone’s cup of tea, but C.C. Banana had his appeal (appeal get it? C.C. would have loved that pun).

In other circles, A.J. as himself was also known for his outgoing personality and zany humor as well as for his support and Fat Activism in producing the CD Whole Lotta Love, An All Star Salute To Fat Chicks, a unique musical montage celebrating the Big Beautiful Woman. 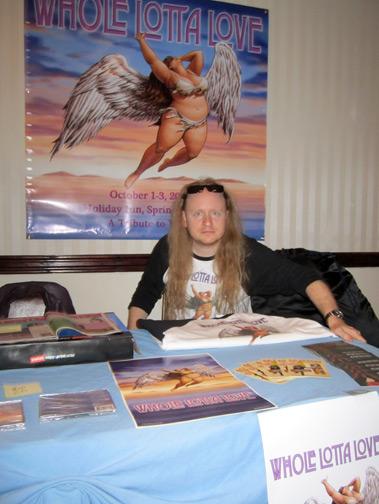 A.J. at the CD release party for “Whole Lotta Love”

A.J. was always gracious and funny and gave his all as C.C./Maul and himself.

As I wrote on his Facebook an hour or so after I learned of his death this morning:

Logically my head processes what has happened, but my heart cannot reconcile the lively force that created such irreverent characters and gave a Whole Lotta Love to us all, lost that joy for himself. R.I.P. A.J. you will be missed.”

Knowing why he chose to end his life in my head and understanding why in my heart are very two different things. It’s so many hours later and I sit here still unable come to grips with the loss. The C.C. I know would pull some gallows humor from this and a part of me that usually can crack a snark at damn near anything feels as though I’m somehow failing his spirit in my inability to do so now.

I’ve returned to his Facebook page a couple of times today to read all the heartfelt comments of so many who have felt his love whether for just a few moments at a party as C.C., for few years as A.J. or for many years as Tony (as his nearest and dearest know him). It’s crying shame he could not feel all this love for him in return to help him through.

R.I.P  Anthony Joseph Confessore – you made us tear up in laughter, I wish that was why we cried now.